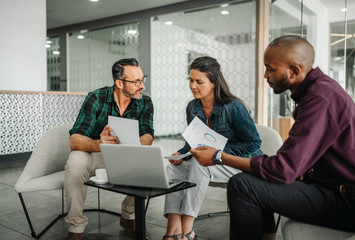 We are all navigating uncharted waters. Although there is much uncertainty about the near future for re-starting businesses and organisations, you should feel encouraged that strong organisational foundations and best business practices will get us through the many challenges ahead.

Even though a lot is on hold right now, we’d like to offer five tools on best practices for hiring, so that your organization is primed to recruit the best possible workforce once the nation gets rolling again.

One of the problems that is common in hiring is the prevalence of unconscious bias in making recruitment decisions. It happens when learned stereotypes influence our thinking – and it occurs at the unconscious level, which is why it’s so hard to eliminate! The reason that unconscious bias is a serious problem is that we are less likely to hire a diverse team, which ultimately limits innovation and a competitive edge in the marketplace.

So, how do we turn the mirror to see into our own hiring blind spots? There are a number of tools you can deploy to counter biases in your hiring decision-making:

1. Accept that you, and your hiring team have unconscious bias.

If you’re human, you have it. It’s not something to feel badly about, because it’s simply the way our minds work. Every second, our senses receive 11 million pieces of information; however, our brains can consciously process only 40 pieces at a time, which means the rest of the processing is done unconsciously.

Once everyone acknowledges and accepts unconscious bias exists, you can move on to consciously taking charge of overcoming these biases. For instance, as you review information about a candidate, take the time to question your own possible biases. Do you assume an upbeat or attractive person may be better at their job? Do you believe a man is more suitable for the role than a woman? Throughout the recruitment process, work to assess the applicant on their specific skills, qualifications and experience, not your ‘gut feeling.’

If team members are sceptical about their own implicit biases, there are online tests which can reveal hidden biases to get everyone on board with the task of challenging unconscious biases.

2. The position description: ask “who has not been invited to be at the table?” Is the language in your job description gender-neutral? Are there any discriminatory aspects to it? Be sure to examine the language to determine whether it is genuinely essential for the position. Why not make your call for applications to explicitly invite diverse communities to apply?

3. Ensure those that are interviewing are well trained. Professional hiring managers should lead the hiring drive rather than simply facilitate the process. Also, hiring in teams can help to avoid unconscious bias, particularly if you don’t hold the same affinity bias as your colleagues. This happens when we regard a candidate in a more positive light because they are like us.

4. Set up a system of ‘blindfolding’ the resume. Remove demographic information such as name, date of birth and gender, and leave only the applicant’s relevant skills, experience and qualifications. This helps line managers to avoid discrimination based on culture, age and gender.

In a famous Harvard and Princeton study in the ‘70s, symphonies began doing blind auditions of musicians. Using this method, women were more likely to be hired by between 25 and 46 percent. But what’s really interesting is that after female musicians realised they would receive fair treatment during the audition process, they applied in higher numbers.

5. Create standardised interviews. Give every candidate the same questions so that every person receives fair treatment. Without structure, interviews can meander off track, and recruiters may end up unconsciously leaning on cognitive behaviour such as confirmation bias to evaluate candidates. This type of bias occurs when we rely too heavily on the first impression of someone – either positive or negative. One last step is to be sure to create a hiring environment that is consistent and the same for all applicants.

If you or your business seeks support on creating an interview process plan that is equitable for all, contact us to set up your hiring personnel for success.

We provide specialist sector insights, as well as an extensive network of industry professionals. Subscribe to have our alerts delivered directly to your inbox.

Subscribe for the latest jobs and recruitment advice, delivered straight to your inbox